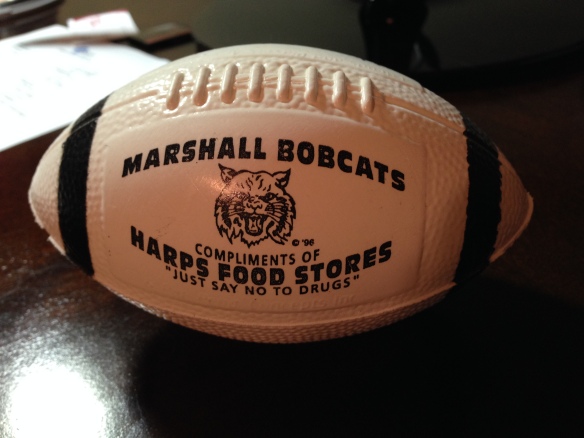 There are many things that Kristine and I have in common but more than anything else Kristine and I share a love of nostalgia. We like old stuff, old music, old books, and especially old photographs. Although she gets it from both sides of her family we both love taking pictures.  A picture captures a moment in time that will never come again. When you take a picture, you create tomorrow’s nostalgia. We will always have that in common.

Another thing we both have in common is we were both high school athletes. I was a pitcher in baseball season and a quarterback come football season.  I was never as good as I thought I was, few athletes are, but I was pretty good and I loved to throw the ball.  Kristina also loved to throw the ball. Kristina was also a fast pitch softball pitcher.

When she was not playing softball Kristina was a cheerleader. During football season every time the Marshall Bobcats would score the cheerleaders would throw souvenir footballs up into the stands.

It was homecoming 2003 and I had told Kristina be sure and throw me a ball for a souvenir.  We were a few minutes late to the game and as we arrived I saw the cheerleaders throwing balls into the stands.  Now girls these days throw a lot better than the girls did when I was a boy. All of these girls were doing a pretty good job arching these balls up into the stadium.  Unfortunately I wasn’t in the stadium and I was still a long ways off. I saw Kristina standing with a ball looking side to side like an NFL quarterback searching for the open man. I let out a hollered, “Kristina,” the second Kristina spotted me she step toward me and let rip a bullet that would’ve hit me square in the chest had I missed it.  No arching, that was a straight shot.

Yes sir, that there was daddy’s genes. I grew three inches on the spot. Kristina has accomplished so many things of far greater importance than throwing me a bullet pass with a plastic souvenir football, but you see, for me that pass was nostalgic.  Like a photograph that pass was a reflection of my own childhood. Thanks Kristina for the souvenir ball and so many other wonderful memories.