He or she is a chip off the old block; the apple (or acorn) does not fall far from the tree; like father like son; these are all idioms that express the same idea that children are often very much like their parents. The truth is every child is a twisted combination of the genes of two families not only do they take after Mom and Dad but the grandparent genes have a way of skipping a generation and showing up again.  I, like most parent am proud of just about everything my kids do but also like most parents I am particularly proud when I see my kids do something that reminds me of myself.  Each of my children has done things at one time or another that caused me to stand just a little bit taller and smiled just a little bit broader.  These blog post are intended to one day be put together into a book for my children. One of the Chapters will be about the times when I was not only proud of my children but when I could see the reflection of myself in them.

My youngest child Noah is fast becoming a very impressive young man.  Noah like the rest of the family loves music and can eat his weight in cheese dip. He is a straight A student like his Mom and Melissa (his oldest sister) and reads voraciously and has an artistic flair like his other sister, Kristina. 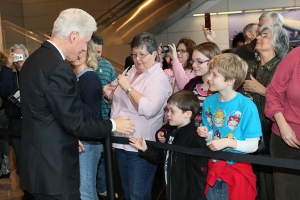 Noah waiting to shake the hand of President Clinton

Noah is only eleven so he is still developing and trying to figure who he is and what he is going to be.  It is exciting to see him exploring the world around him, and all the different possibilities.  Whatever he decides to do with his life it is clear he has his Dad’s love of history.  I would like to say I taught him to love history but the truth is I did not have anything to do with it. He taught himself. When he was just a little fellow he got a ruler as a prize at the fall festival at church. On this ruler were the faces of all of the American Presidents. Noah wanted to know who those men where and why they were important. He has taught himself all about the presidents. He has also learned about the first ladies. Whatever he does in life I think Noah will always have an interest in the people of the past and how government works. It pleases me that he and I share this area of interest and that he came to it on his own.

It also pleases me that Noah cares about other people. This past week was Noah’s parent/teacher conference. All his teachers love him but one teacher went on and on about how he had used his share time to talk about bullying. He encouraged the other kids not to bully and to take up for others when they are bullied. Most of the other eleven years olds use they share time to tell of a new toy or a family outing.  Noah used his time to try to influence the behaviors of his friends in a positive way.  It was clear that Noah not only impressed his teacher he actually moved her.  When we ask him about it he acted like it was no big deal.

This story has been floating around in the back of my mind ever since we met with the teacher.  Noah on his own initiative at eleven used his share time to tell a story in a moving way in an effort to motivate his class mates to respond in a positive way. Hmm, who does that for a living?  Of course I first thought that is just like Dad. I am a lawyer and that is what I do. Then I thought that is also like his Grandpa Warford who was a Baptist preacher. It is also very similar to the many salesmen he has in the family like his grandpa Weir and great-uncle Chuck.  Noah has boldness, a love of people and a persuasiveness that would help him be a great salesman, preacher or lawyer. Who knows what he might be but whatever he does I hope he will always keep his love of history.