Elmer and Sallie Warford on their 50th Wedding Anniversary.
October 31, 1976

My grandparents, Elmer and Sallie Warford were married October 31, 1926, in Hot Springs, Arkansas. There was no cake, no toast and no photographer. After the ceremony the couple made their way back to the old Warford home place in Saline County near Lonsdale. It was after dark when they arrived at what would become their new home. The home had not been lived in for some time and was a rather rustic cabin. Now my grandmother was by the standards of the day, something of a city girl, having been raised on a dairy in Hot Springs. She was completely unprepared for what was waiting inside. My grandfather lit a lantern and opened the latch string door. He walked into the main room of the cabin which also served as the kitchen and dining room and set the lantern up on the table. When the lantern hit one end of the table a bobcat jumped from the dark corners of the room and landed on the other end. The bobcat let out a shrill hissing sound and bared its teeth. My grandfather beat a hasty retreat to the door only to find that my grandmother had slammed the door locking it tight. The bobcat was as afraid of my grandfather as my grandfather was of the bobcat and fortunately the bobcat still had a way out. The bobcat bounded around the room a couple of times and then shot out through a vent in the roof of the cabin. My grandfather loved to tell this story. At the end he would say something like, “now that is what I would call an exciting wedding night.”

My grandparents had hard times and good times but throughout 50 years they were committed to each other and their family. On October 31, 1976, they celebrated their 50th wedding anniversary at the home of Chuck and Linda Warford. Linda was the perfect hostess and we had a formal toast (punch of course), a beautiful wedding cake and even a photographer.  Well, we sort of had a photographer, I actually took these pictures. 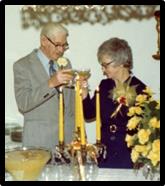